Three and a half years ago I started listening to a podcast called NeoScum.

I picked it up on a whim. I had just been thinking shortly before that I wanted to get into some new podcasts (a rare occurrence for me) and I saw some people reccing actual plays on twitter. I'm burnt out on typical fantasy these days so NeoScum immediately stood out to me. I thought it looked interesting. I've been burned before by cool media turning out to be made by shitty people so I flick through the cast's twitters real quick and I think, huh, okay, they look like good people, let's give this a shot.

A year later I'm in Chicago with my best friend, sliding off my seat laughing at Gannon Reedy's post-interlude piece at the final Doing Drugs and Dying In Space Ritual, having just spent five hours commandeering a Raising Cane's with a gang of other NeoScum fans.

I found NeoScum at a time when I was kind of drifting. I didn't really have a community that I was part of, having jumped ship on my previous one for reasons I won't go into here. I was kinda into some of Polygon's stuff but nothing really had me hooked. NeoScum grabbed me by the throat and tabled me. I binged the whole thing as fast as possible and then, because I have autism brain, proceeded to listen to the whole series again, and again, on repeat, at least six or seven times, I think.

(Thus was born the famous NeoScum plot map - I couldn't help but try to make connections and figure out who was working with who, where the next big reveal would be, which trap Gannon would spring next. My brain absorbed all the information like a sponge and I needed to visualise it to be able to keep track of it, and it wound up being helpful not just for me, but for the cast themselves.)

NeoScum has, obviously, had a huge impact on me as a creative. I'm a very visual person and Gannon provides such vivid cinematic descriptions, helped along by Casey's incredible audio work--it's impossible for me not to want to interpret the events of the podcast as visual art. And because I'm always thinking "what if" and dropping my favourite characters into Situations, that spawned Aubrey, who took on an unexpected life of her own--having initially been intended as a one-off throwaway character, if you can believe it--and the whole Transitverse, which is now arguably my most prolific project to date. Gannon and Blair between them have set up this fascinating (and horrific) backstory and there's so much potential still to be mined from it through the perspectives of other characters. I hope they don't mind me borrowing and expanding on it, because for me, it feels like the meat of the Transitverse has only just begun; the end of NeoScum S1 is just flinging open the doors for me to unleash a story I've been working on behind the scenes for literally years now, and I can't wait to share it.

I remember when I started entertaining the idea of visiting the US... it was like 3am and it was during one of Casey's streams back when he was streaming Control and Kingdom Hearts a lot. I was looking at GenCon pics and thinking how much fun it would be to attend and I was like lol... what if... and then it turned out flights to Chicago were WAY CHEAPER than I anticipated, and MBMBaM were doing a show in Chicago in the fall, and completely coincidentally I discovered that I'd be there just long enough to go to DDADIS too. I'm so glad I ran with that impulse and went on that trip because it's one of the best things I've ever done in my life. I got to meet so many of the amazing people I've come to know through NeoScum, I got to visit my best friend, I got to see an amazing city (that I'm desperate to return to), and I don't think I've ever laughed harder in my life than I have while I was there. It was incredible.

NeoScum has cultivated one of the most thoughtful and caring communities I've ever had the pleasure of being a part of. It's home to some wildly talented people, wildly funny people, and multiple times I've watched it pull together to help out community members in times of need. I've been part of communities that pledged similar values on paper but struggled and/or openly failed to adhere to them in practice and to see this community manage to maintain this degree of kindness and respect, both for one another and for the people who make the show, is so rare and so refreshing. 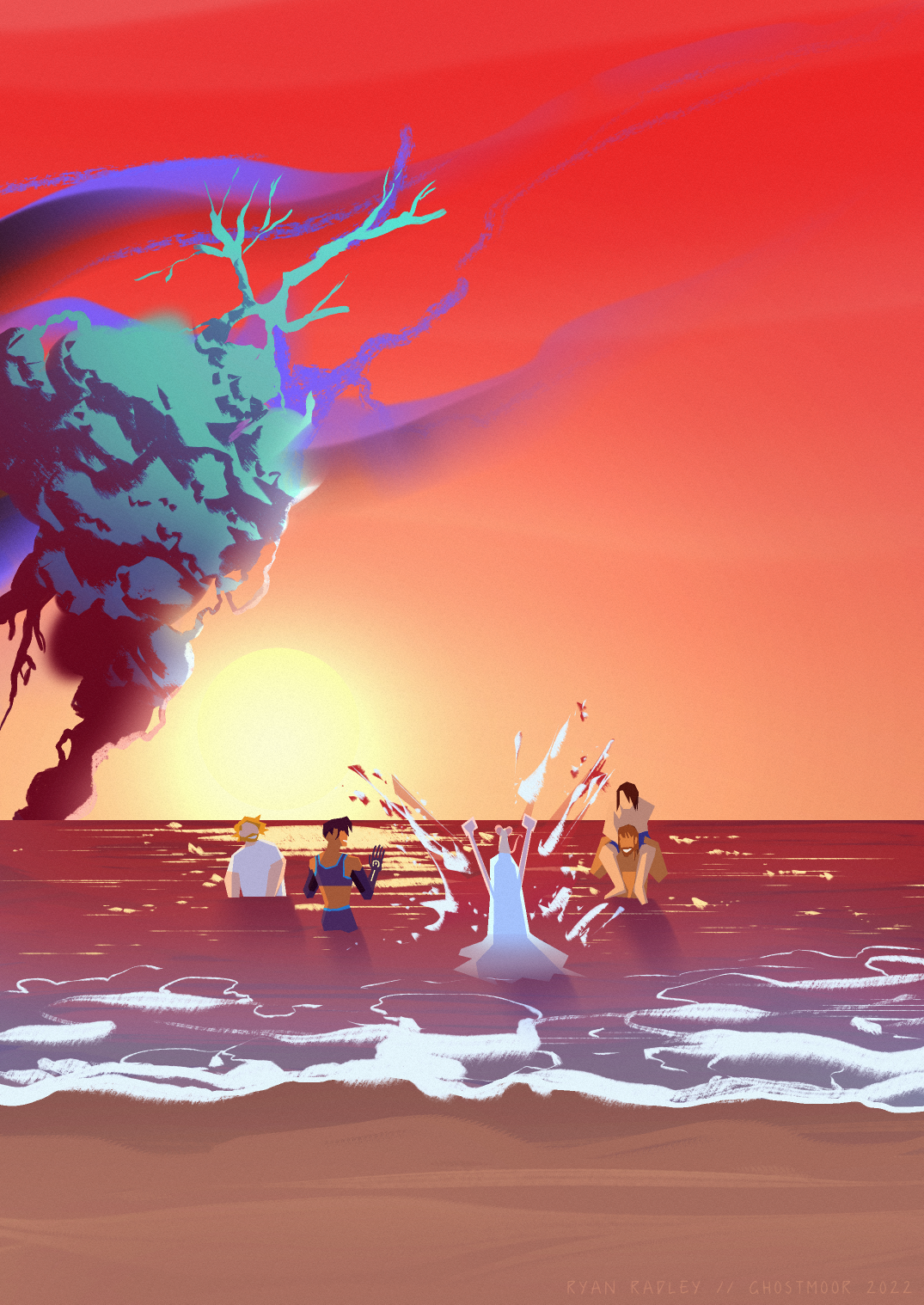 I'm gonna miss NeoScum while they're on hiatus. Even though I know this isn't the end forever, and there'll still be gaidens in the interim, these characters have been very dear to me for the past few years. Other people have already said it and maybe it's a cliche sentiment, but it feels like I'm saying goodbye to beloved friends without knowing if or when I'll see them again. But the end of this story was so kind to them, in contrast with the hell they've been through, and I'm glad for that. And maybe they'll be back! Whatever happens, I'm glad I decided to hit play on that first episode that first time. NeoScum set my life on a new course and launched me out of a catapault along it. I'm gonna enjoy the gaidens, and catch up on all of the art I've wanted to make while NeoScum prime has been running that I haven't been able to make because new episodes have immediately overwritten the old ideas with new ones, and I can't wait to see what comes next.